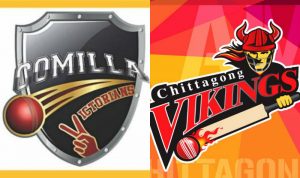 The Bangladesh Premier League (BPL) is a professional cricket league consisting of seven franchises. The BPL is one of the three professional cricket leagues in world. The BPL starts in November and each team face each other twice in the league stage. Following the conclusion of the regular season, top four teams advance to the playoffs, a single-elimination game and two qualifier games culminating in the Championship game, between the winner of Qualifier 1 and Qualifier 2. The team with the most BPL titles are Dhaka Dynamites with three titles, including two consecutive titles during the first two seasons of the tournament as Dhaka Gladiators. Comilla Victorians are the only other team to be crowned champions. The teams consists of professional players of all around the globe. Match prediction of Comilla victorians vs Chittagong vikings are as following :-