The RCB vs MI 10th t20 match of Indian Premier League 2020 is scheduled to be held on Monday, 28th September 2020 at Dubai International Cricket Stadium, Dubai.

The Royal Challengers Bangalore team is as bothered by their bowling as ever. Powerplay and Death Overs leaked significantly more runs, especially Umesh Yadav and Dale Steyn. This is a cause for concern for Virat Kohli. The first match was won by Royal Challengers Bangalore, it seemed that the team of Bangalore would do well this year but it could not happen and they lost the second match by a huge margin.

Only Yuzvendra Chahal and Shivam Dubey have been able to bowl well for Royal Challengers Bangalore. The first match was also won by RCB due to these two bowlers. Royal Challengers Bangalore have played two matches so far, winning one match and losing the other. If seen, the batting of RCB is also not very special, no batsman has scored runs except AB de Villiers. Captain Virat Kohli has also failed, scoring only 15 runs in two innings of two matches. Josh Phillips has also proved to be a loss deal for Bangalore, neither scoring nor keeping well.

To win a match against a strong team like Mumbai Indians, RCB has to come up with a different strategy. The match is not won with the help of just one or two players performance, the entire team will have to perform well together.

Young Devdutt Padikkal had attracted everyone in his first match with good batting. This time too, he will have to start with a tight finish with Aaron Finch, after that Virat Kohli and AB de Villiers will have to take the team for a big score in the middle order. Our cricketwebs experts believe that Josh Phillips should be replaced and another foreign player should be given a place in the team.

In bowling, Dale Steyn and Umesh Yadav will have to curb runs, avoiding extra runs. Yuzvendra Chahal, Navdeep Saini, and Shivam Dubey are bowling well, they will have to repeat the same performance. If Chris Morris is included in the team, then the team will get a lot of strength. He is not only a good batsman but also a good death bowling expert.

Mumbai Indians have played two matches so far in the IPL 2020, losing against Chennai Super Kings and winning against Kolkata Knight Riders. Mumbai Indians have done well in both matches. Players are playing their roles well in all departments. Captain Rohit Sharma and Quinton de Kock are starting well in the opening. Surya Kumar Yadav and Saurabh Tiwary are playing good shots in the middle order, while in the end Hardik Pandya and Kieron Pollard are hitting big sixes in the slog-overs.

Against Kolkata Knight Riders, skipper Rohit Sharma scored a blistering 80 off 54 balls, and became the man of the match, while Surya Kumar Yadav and Sourabh Tiwary also played good shots and led the team to a big score.

The bowling of Mumbai Indians is also great, Jaspreet Bumrah and Trent Boult are doing great bowling. In the last match, both played a big role in the team’s victory.

In the middle overs, Krunal Pandya and his brother Hardik Pandya will be bowling, while James Pattinson is included in the team as the fifth bowler.

How many runs score in first 6 overs batting powerplay?

Favorite Team In The Match

Royal Challengers Bangalore may not have the upper hand in this match but they are able to compete well with Mumbai Indians. Bangalore’s batting is stronger than Mumbai on paper, although they do not appear to have scored on the field. If Bangalore’s batting clicks, they specializes in scoring big. Their team has done this before. For the moment, it can be said that the team of Mumbai Indians is in a much better position than Royal Challengers Bangalore.

The weather in Dubai will be clear, the heat will be very high. There is no chance of rain, the players will also sweat due to the humid. The pitch is quite dry. Will be helpful for batting, there is a strong possibility of dew falling in the second innings. The team that won the toss would like to field first. The spinner’s contribution will be significant as the ground dimension is large.

Winning Chances Of Both Team In This Match

Who Will Win Royal Challengers Bangalore vs Mumbai Indians
Cricketgyaan

Q. Which Team will play today?

Q. Can I watch it live or stream the match?

Ans. Royal Challengers Bangalore is our recommended winner in this match.

Q. What is our toss prediction?

Q. How many sixes will be hit in today match?

Ans. 8+ sixes will be hit in this match.

Q. Which team to make highest score in first 10 overs?

Q. A fifty to be scored in the match?

All of Royal Challengers Bangalore vs Mumbai Indians fans who are waiting for the prediction for this IPL match are now can check this match prediction with 100% sure winning. After checking the player’s previous performance and team analysis our expert had predicted the match-winner for RCB vs MI Indian Premier League match. So Royal Challengers Bangalore vs Mumbai Indians Match Prediction 28th September 2020 from our expert’s team is here, don’t go anywhere when free is always here.

Disclaimer: Predictions are for entertainment purposes only. We don’t get involved in or promote betting or gambling. Also, We strongly discourage behaviors of participating in illegal activities related to cricket. Our experts try to be as correct as possible, but we do not guarantee 100% correctness. 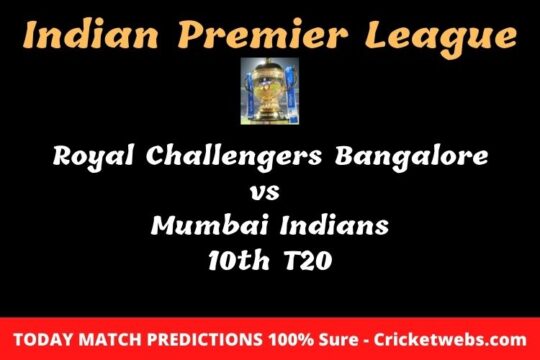